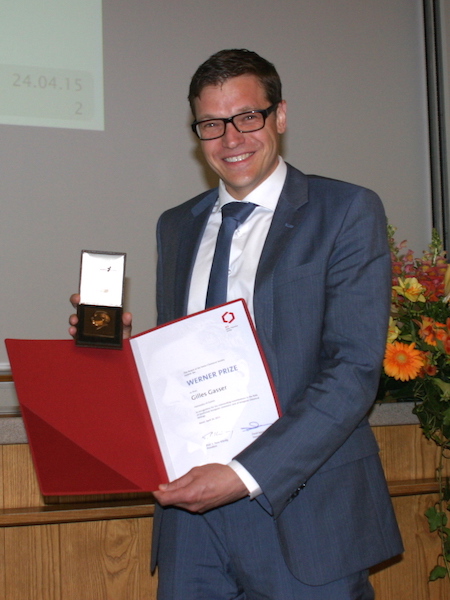 On the occasion of the SCS Spring Meeting in Basel on April 24 2015, the SCS president Prof. E. Peter Kündig awarded Prof. Gilles Gasser, University of Zurich, the Werner Prize 2015 for his outstanding contributions in the field of medicinal inorganic chemistry and of inorganic chemical biology.

Prof. Gilles Gasser and his group are currently working on three different but complementary topics, namely Inorganic Chemical Biology, Medicinal Inorganic Chemistry and Medicinal Organometallic Chemistry. All projects undertaken in his group involve the preparation, characterization and utilization of metal complexes for biological or medicinal purposes. The single objective is to understand, identify and/or influence biological processes in living cells using metal-based compounds. Their research therefore lies at the interface between inorganic chemistry, medicinal chemistry, chemical biology and biology. As a consequence, Prof. Gilles Gasser not only hosts chemistry students but also a biology student who jointly works between the Institute of Inorganic Chemistry and the Institute for Molecular Cancer Research at the University of Zurich.

The following topics are at the forefront of their current work: