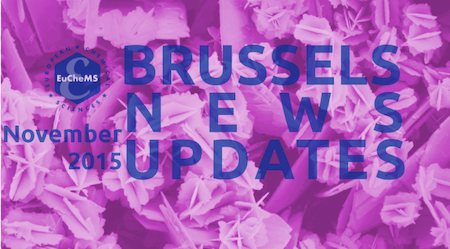 New European Scientific Advice Mechanism – More Science for Better Policy
The European Commission's new Scientific Advice Mechanism (SAM) was officially launched on the 10th November with the announcement of the seven leading scientists who will form the first High Level Group of scientific advisors. Together with a six million euro grant to European academies and learned societies, this marks a new approach to the use of independent science advice in Commission policy making. The mechanism is being launched six months after it was first announced by the European Commission, following protests from the scientific community, including also EuCheMS, due to the extinction of the Chief Scientific Advisor position. The seven leading scientists integrating the SAM are Janusz M. Bujnicki, Pearl Dykstra, Elvira Fortunato, Rolf-Dieter Heuer, Julia Slingo, Cédric Villani, and Henrik C. Wegener.
Source: http://ec.europa.eu/research/

New Seal of Excellence to Increase Quality of Regional Research Funding
The new "Seal of Excellence" scheme will allow regions to recognise the quality label awarded to promising project proposals submitted under Horizon 2020, the EU's research and innovation programme and promote their access to different funding sources like the European Structural and Investment Funds (ESIF) and other national or regional investment programmes. More details can be found here.
Source: http://europa.eu/

Horizon 2020 Work Programme 2016-2017 in Western Balkan Countries
The European Commission will invest almost €16 billion in research and innovation in the next two years under Horizon 2020, following a new Work Programme for 2016-17 adopted in October 2015.
Albania, Bosnia and Herzegovina, Madedonia, Montenegro, and Serbia are associated to Horizon 2020, thus legal entities from Associated Countries can participate under the same conditions as legal entities from the Member States. Kosovo can also participate but as a third country.
Source: http://wbc-rti.info/

Air Quality: MEPs Approve New National Caps on Pollutants
EU Commission plans for more ambitious national caps on emissions of six key pollutants were endorsed by Parliament on the 28th October. Air pollution causes about 400,000 premature deaths in the EU yearly, and the plans could save up to €40bn in air pollution costs by 2030. The Members of the European Parliament (MEPs) approved the proposed caps for sulphur dioxide (SO2), nitrogen oxides (NOx), non-methane volatile organic compounds (NMVOC), methane (CH4) ammonia (NH3), and fine particulates (PM, less than 2.5 micrometers), to be achieved by 2020 and 2030, as proposed by the Commission.
Source: http://www.europarl.europa.eu/news/

EU Introduces more Efficient Monitoring of Drinking Water
As a first step following the European Citizens' Initiative Right2Water, as well as the public consultation on the quality of drinking water to which EuCheMS contributed, new rules were adopted by the Commission to provide flexibility to Member States as to how drinking water quality is monitored in around 100 000 water supply zones in Europe.
Source: http://europa.eu/

Education and Training Monitor 2015
The recently published 2015 edition of the EU's Education and Training Monitor shows more Member States have now reached their goals in increasing the number of students completing higher levels of education and minimising those leaving education early. This means Europe is on track to reach the targets set in its growth and jobs strategy by 2020. However, this progress is uneven, with discrepancies between and within Member States. Some interesting facts: employment rate of recent university graduates is 80.5%, in terms of gender 33.6% of men attend to tertiary education whereas 42.3% of women participate in tertiary education.
Source: http://europa.eu/

Climate change: EU Shows Leadership Ahead of Paris with 23% Emissions Cut
The European Union is on track towards meeting and overachieving its 2020 target for reducing greenhouse emissions by 20%, according to a report published by the European Environment Agency (EEA). The "Trends and projections in Europe 2015" report reveals that greenhouse gas emissions in Europe decreased by 23% between 1990 and 2014 and reached the lowest levels on record.
Latest projections by Member States show that the EU is heading for a 24% reduction by 2020 with current measures in place, and a 25% reduction with additional measures already being planned in Member States. The EU is already working towards its 2030 goal of an emissions reduction target of at least 40% —the EU's contribution towards the new global climate change agreement in Paris in December. Even though chemistry has already contributed to the current emissions cut EuCheMS believes that the contribution of chemistry will be even bigger in the future.
Source: http://europa.eu/

ERC Awards 44 Proof of Concept Grants
The ERC has recently announced the names of 44 of its grant holders who will receive top-up funding to explore commercial or innovation potential of the results of their ERC-funded research. These Proof of Concept grants, worth €150,000 each, can be used, for example, to establish intellectual property rights, investigate business opportunities or conduct technical validation.
Source: https://erc.europa.eu/

Interview with 2015 EuCheMS EUCYS Awardee
Michaela Kajšová is a young and enthusiastic student who won the 2015 European Union Contest for Young Scientists (EUCYS) EuCheMS Award with her project entitled "The Effect of Cholesterol on Biological Membranes". You can read the interview by clicking on the link below.
Source: http://www.euchems.eu/

Chemistry for the Future Solvay Prize
The Chemistry for the Future Solvay Prize rewards a major scientific discovery that could shape tomorrow’s chemistry and help human progress.
The prize perpetuates the strong support for scientific research given by the founder of the Solvay Group, Ernest Solvay. It is intended to endorse basic research and underline the essential role of chemistry, both as a science and an industry, in helping solve some of the most pressing issues the world is facing.
The €300,000 prize is awarded every two years, and the 2015 Prize will be awarded on the 18th November at the Palais des Académies in Brussels, Belgium.
Source: http://www.solvay.com/

Roadmap - Modernising the EU copyright framework
This roadmap focusses on the second set of measures that the Commission intends to adopt to modernize the existing copyright rules. Subject to further decisions, at the moment the Commission is focussing in particular on the following objectives: (i) allowing for wider online access to works by users across the EU, (ii) modernising the EU framework of exceptions and limitations, focussing in particular on those exceptions and limitations which are particularly key for the functioning of the digital single market and the pursuit of public policy objectives and (iii) achieving a well -functioning copyright market place, for example as regards the role of online intermediaries in relation to the distribution of copyright-protected content.
Website: http://ec.europa.eu/

Roadmap - Revision of the Fertilisers Regulation (EC) No 2003/2003
The main policy objective of the initiative is to incentivise large scale fertiliser production in the EU from domestic organic or secondary raw materials in line with the circular economy model by transforming waste into nutrients for crops. It is an outcome of public consultations in 2012.
The initiative would provide a regulatory framework radically easing access to the internal market for such fertilisers. Furthermore, it will address the current, well-recognised environmental concern stemming from cadmium contamination of fertilisers from phosphate rock, and remove the current market fragmentation to which it currently gives rise in the form of national cadmium limits. The setting of limit values, aiming at minimising the negative impact of fertiliser use on the environment and on human health, will contribute to a reduction of cadmium accumulation in soil and of cadmium contamination of food and water.
Website: http://ec.europa.eu/

Consultation on a Possible Restriction of Hazardous Substances In Textile Articles and Clothing For Consumer Use
The Commission believes this public consultation is needed to target relevant chemicals and articles and to consider the proportionality and enforceability of a possible restriction in this area. The main objectives of the public consultation is to collect information on 1) the presence or likelihood of presence of the identified carcinogenic, mutagenic or reprotoxic (CMR) substances in relevant consumer articles and in so far as is possible also gather information on their concentration, function and on the availability of alternatives; 2) and on the potential socio-economic impacts and the enforceability of the possible restriction.
Deadline: 22 January 2015
Website: http://ec.europa.eu/growth/

Public consultation on Zinc Oxide in the framework of Regulation (EC) No 1223/2009 on cosmetic products
The European Commission is inviting any interested parties, including authorities of Member States, manufacturers of cosmetic products, producers of the substances concerned and relevant industry and consumers associations, to submit their comments on the proposed measures and on their possible economic impact.
Deadline: 24 December 2015
Website: http://ec.europa.eu/growth/

SMEs´ Research and Development within the EU
Among other data, the latest Flash Eurobarometer survey shows that only 6% of SMEs in the EU have worked with a partner based abroad (within the EU) for research and development, showing that there are still many collaboration opportunities to be explored.
This Flash Eurobarometer survey explores the international business activities carried out by SMEs inside and outside the Internal Market.
Source: http://ec.europa.eu/

Serbia is Joining COSME
Earlier this month, Serbia and the European Commission have signed an agreement formalising the entry of Serbia to the Competitiveness of Enterprises and Small and Medium-sized Enterprises Programme (COSME). Serbia's decision to join COSME was welcomed and the opportunity was taken to highlight another tool of the programme - the Enterprise Europe Network, which helps SMEs to develop and facilitate their internationalisation, and access innovative technology. COSME will support projects on a wide range of topics that include clustering, female entrepreneurship, reducing the administrative burden for companies and intellectual property rights protection for companies operating in non-EU countries.
Serbia is the sixth country outside the EU to join and contribute to the programme, after Montenegro, the former Yugoslav Republic of Macedonia, Moldova, Turkey and Albania.
Source: http://ec.europa.eu/growth/