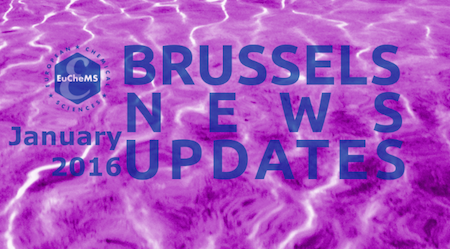 Priorities for the Dutch Presidency of Council
The Netherlands, which will be holding the Presidency of the Council of the European Union during the first semester of 2016, is giving a central place to science within their Presidency priorities, namely within the priorities “Europe as an innovator and job creator”, and “Forward-looking policy on climate and energy”. The Dutch Presidency will also look into how the impact of investment on science and society can be magnified by improving the dissemination of and access to scientific knowledge (i.e. by practising open science and promoting open access), making the results of publicly funded research publicly available. A conference on this topic will take place in April in Amsterdam.
Source: http://english.eu2016.nl/

Dutch Presidency Discussed in the European Parliament
The European Parliament´s Committees discussed the priorities of the Dutch Presidency of the Council of the EU earlier this month.
At the Industry, Research and Energy Committee (ITRE), the Dutch state secretary for education, culture and science, Sander Dekker, said the Dutch Presidency would encourage member states to invest more in research and innovation, through a smart regulatory framework, made attractive to researchers with an "open science with open access" approach.
While welcoming this agenda, MEPs highlighted the need for adequate funding for European research and competitiveness-boosting programmes.
Source: http://www.europarl.europa.eu/news/

National Emissions of Air Pollutants: Council Agrees Its Position on New Limits
On 16 December 2015 the Council agreed on a general approach for the proposed Directive to reduce national emissions of certain pollutants (the so called new NEC Directive). This agreement, reached during the Environment Council meeting, will serve as a basis for negotiations with the European Parliament on this file.
This legislative proposal reviews the annual caps per country for emissions of certain air pollutants, introducing new reduction commitments from 2020 to 2029 and from 2030 onwards. The aim is to further address the health risks and environmental impacts posed by air pollution, as well as to align EU law with international commitments (following the revision of the Gothenburg Protocol in 2012).
Source: http://www.consilium.europa.eu/

New ERC Vice-President
After being elected in December last year, Professor Klaus Bock, a chemist, started his term as a Vice-President of the European Research Council (ERC) on the 1 January 2016. As one the three Vice-Presidents, Prof. Bock is in charge of the domain Physical Sciences and Engineering and is a member of the ERC Board. Klaus Bock, who holds a PhD in Organic Chemistry from Technical University of Denmark, is a member of the ERC Scientific Council since February 2013.
Source: https://erc.europa.eu/

The European Union Leading in Renewables
The European Commission has recently published a brochure making the case for the use of renewable energies. Among other points, this brochure mentions that through the identification of strategic priorities and specific actions, supported by collaboration between research institutes, academia and industry, it has been possible to leverage public research funding to deliver dramatic results: in one year, the total investment in Europe for research and innovation in four renewable energy technologies was around 3.8 billion euro. The EU contribution stimulated 1 billion euro from national budgets and 2.6 billion euro from corporate funding. Moreover, European companies hold today 40% of all patents for renewable technologies and are leading in key sectors.
Source: http://ec.europa.eu/energy/

Innovative Communication for Innovative Science
Two innovative projects to promote the results of ERC - funded research have just been launched.
ERC=Science² is a pan - European communications campaign focusing on popular scientific themes that It will highlight outstanding ERC projects and researchers through a set of innovative channels and materials. ERCcOMICS will bring together comics artists and ERC grantees to produce webcomics illustrating key scientific achievements. The comics will be paired with interviews with ERC grantees, documentaries on their projects and interactive content. Science exhibitions and comics festivals, as well as public talk sketching and contests for students will be used as platforms to popularise ERC-funded research.
Source: https://erc.europa.eu/

Inspiring Young Scientific Minds
A website to assist science teaching through inquiry has been developed in order to instil a deeper understanding and appreciation sciences.
The portal has been developed through the EU-funded Strategies for Assessment of Inquiry Learning in Science (SAILS) project, which has sought to support secondary level teachers in adopting inquiry-based science education.
These resources and materials are now freely available to science teachers interested in building their competence in assessing inquiry skills in the classroom.
Source: http://cordis.europa.eu/news/

From Brain Drain to Brain Gain
There is a long history of emigration from Southeast European countries, resulting in large communities residing abroad that are usually referred to as SEE diaspora. Regarding scientific diaspora and brain drain, the governments in the region - being aware of related challenges for the overall economies – have recently undertaken a number of initiatives to address the issue. These include several measures, from creation of directory databases, “knowledge networks,” and discussion forums to the provision of visiting and post-doctorate fellowships. Several concrete examples of these policies can be read in the link bellow.
Source: https://wbc-rti.info/in_focus

Pathways Towards the Decarbonisation and Resilience of the European Economy in the Timeframe 2030-2050 and Beyond
Deadline: 8 March 2016
Website: http://ec.europa.eu/research/

Preparation of a New Renewable Energy Directive for the Period After 2020
The objective of this survey is to consult stakeholders and citizens on the new renewable energy directive (REDII) for the period 2020-2030, foreseen before the end of 2016. The bioenergy sustainability policy, which will form part as well of the new renewable energy package, will be covered by a separate public consultation.
Deadline: 10 February 2016
Website: https://ec.europa.eu/energy/

Inception Impact Assessment on the Partnership for Research and Innovation in the Mediterranean Area (PRIMA)
The proposal for PRIMA Joint Programme submitted in 2014 focuses on the development and application of innovative solutions for food systems and water resources in the Mediterranean basin. Two hundred million Euros have been committed for the initiative over a 10-year period starting in 2018.
Source: http://ec.europa.eu/

New Legislation Provides Clarification on REACH Joint Costs
The European Commission has adopted a new Implementing Regulation under REACH to clarify the provisions on data-sharing and joint submission of substance registrations, in the run-up to the 2018 deadline for registration of chemical substances.
Experience from the 2010 and 2013 registration rounds showed that clarification was necessary for all companies with REACH registration duties but in particular for SMEs. The new rules, applicable as of 26 January 2016, specify what is understood by "fair, transparent and non-discriminatory" with regard to data cost-sharing in the REACH Regulation. Where a data-sharing agreement already existed before the entering into force of the new rules, parties may waive certain obligations.
Source: http://ec.europa.eu/growth/

The Candidate List of Substances of Very High Concern for Authorisation Now Contains 168 Substances
The European Chemicals Agency (ECHA) has added five new substances of very high concern (SVHCs) to the Candidate List due to the carcinogenic, toxic to reproduction, persistent, bioaccumulative and toxic, and very persistent and very bioaccumulative properties of the substances. The Candidate List is a list of substances that may have serious effects on human health or the environment. The aim of publishing such a list is to inform the general public and industry that these substances are candidates for possible inclusion in the Authorisation List. Once they are on the Authorisation List, industry will need permission to continue using the substance after the sunset date. Together with the Member States and the European Commission, ECHA is focusing its efforts on the substances that matter most for human health and the environment. The SVHC Roadmap 2020 aims to have all relevant SVHCs on the Candidate List by 2020.
Source: http://echa.europa.eu/