ILMAC, Switzerland’s most important specialist trade fair for process and laboratory technology, came to an end on Friday, 23 September 2016. In the course of the four-day event, more than 12 000 professional visitors obtained information about product innovations, technological applications and process solutions. The issue of “Industrie 4.0”, a topical one affecting the entire sector, was the central subject dealt with at the ILMAC Forum and was examined from both the theoretical and practical perspectives. The “Lunch & Learn” sessions, in particular, organised by the Swiss Chemical Society aroused intense interest amongst the audience. The 20th ILMAC, held from 20 to 23 September 2016 at Messe Basel, has been an encouraging event. The issue of “Industrie 4.0” has definitely arrived in process and laboratory technology and will keep on exercising the specialists for a long time to come. The sector is, however, displaying dynamism and interest in facing up to the current challenges of automation and digitisation. The 12 000 and more specialists from the pharmaceutical, chemical, biotechnology, cosmetics, food and drinks segments attended their “in-house trade fair” at the very heart of the life science cluster in the Basel region. On the final day of the trade fair, high-ranking representatives from government and the chemical industry in the Upper Rhine region visited ILMAC in person and were convinced by what they experienced there.

Mirroring the market
For the first time, the stands of the exhibitors presenting process and laboratory technology were interspersed. In that way, ILMAC reflected the trend of technological applications moving closer to one another on the market and the holistic planning of processes. That concept turned out to be successful, and the trade fair came in for praise on account of its clear arrangement and top quality.

First-hand information
Visitors were able to use the ILMAC Forum, the Lunch & Learn sessions, the LabTec 4.0 and the Cleanroom Control Forum to benefit from the practical experience and valuable knowledge of successful business people and experts from research, development and education and to experience live demonstrations.

Networking event well attended
The networking event held on the Wednesday, in conjunction with longer opening hours, encouraged many visitors, including expats, who would not have been familiar with the trade fair from their training days, to spend the evening at ILMAC after finishing work.

The military as an innovation driver in the kitchen
The Swiss Armed Forces Culinary Team surprised the ILMAC visitors with the performance they put on. The innovative Cooks’ Training Corps demonstrated that chemical processes also play a role in the kitchen and distributed samples of molecular military cuisine.

SCS as partner of ILMAC
In 1957 SCS founded ILMAC and since then a fruitful collaboration between SCS and the Messe Basel was established. For the 2016 edition SCS and the Chemistry Departments of the Univiversities of Applied Sciences (UAS) in Wädenswil, Muttenz, Fribourg and Sion shared a large booth and presented interesting joint projects between UAS and industrial partners in a poster exhibition.
SCS also organized several sessions in the ILMAC Forum and supported the know-how transfer from experts to the fair visitors. 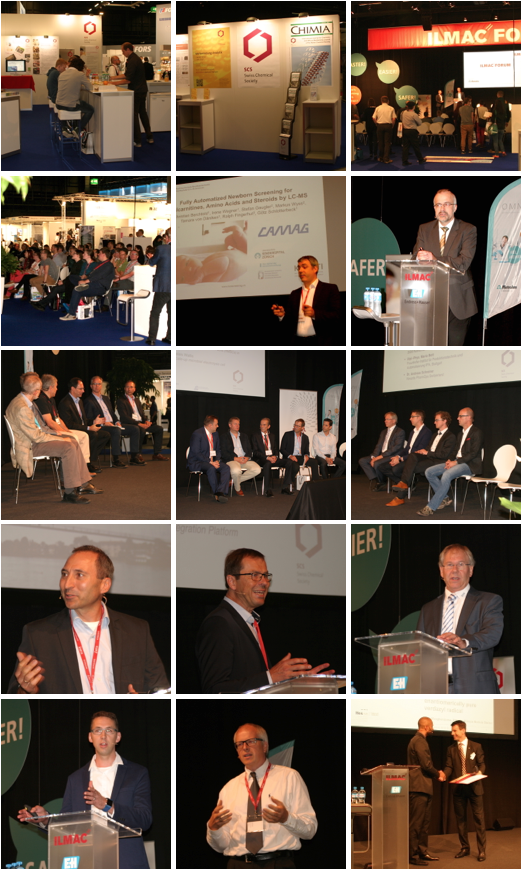