Stick to Science: Pan-European Campaign to expedite the association of Switzerland and the United Kingdom (UK) to Horizon Europe 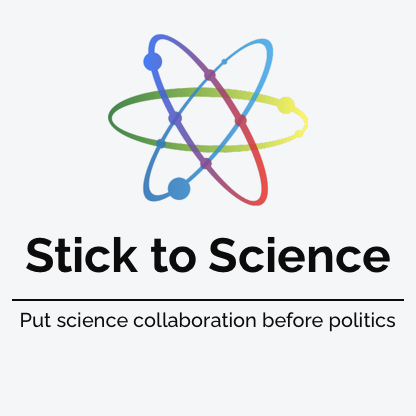 Together we can make a difference and get our voice heard across Europe, making the case that Switzerland’s and the UK’s association agreements to Horizon Europe must be concluded as swiftly as possible. The Swiss Chemical Society encourages all its members to sign the campaign on https://stick-to-science.eu

The Stick to Science campaign is initiated as a pan-European effort to expedite the association of Switzerland and the United Kingdom (UK) to Horizon Europe. The signatories believe that collaboration in science, research and innovation in Europe is more important than ever as we face some of the world’s greatest challenges. At present, the association of the UK and Switzerland to Horizon Europe has been delayed and there is no clear vision of the eventual outcome. Europe’s position in the world would be stronger with robust research collaborations that contribute to a prosperous European research and innovation landscape.

The Stick to Science campaign brings together the voice of researchers, entrepreneurs and innovators, research funding/performing bodies, umbrella organisations, etc. for an open R&I landscape in Europe and at international level, without political barriers. First supporters have produced videos  explaining why they are supporting the #StickToScience campaign. Watch them here.

What does the initiative request?

The Stick to Science campaign calls for an open and barrier-free R&I collaboration among Europe’s research and innovation actors, via the association of the UK and Switzerland to Horizon Europe.

The signatories urge the EU, the UK and Switzerland to rapidly reach association agreements so that the two countries can contribute scientifically and financially to the strength of Horizon Europe and to a truly open, inclusive and excellence-driven European Research Area.

The campaign aims to consolidate the voice of European scientists, researchers, entrepreneurs and innovators, umbrella organisations and funding bodies for an open science and innovation landscape.

Who launched the initiative?

The initiative is a pan-European endeavour, with the support of prominent representatives from a wide range of EU Member States, the UK and Switzerland. The campaign is set in motion by the Presidents of ETH Zurich (Prof. Joël Mesot), EPFL (Prof. Martin Vetterli), ETH Board (Prof. Michael Hengartner), Universities UK, the umbrella organisation of 140 UK universities, Wellcome and the Royal Society. The initiative is funded by the 6 co-initiator institutions.