Call for Nominations for the SCS Industrial Awards 2017

As one of our four strategic pillars, SCS awards excellence in science/chemistry and calls for nominations for the 2017 SCS Awards.

Nominations have to be submitted electronically to .

The deadline for all documents to reach the Swiss Chemical Society is September 30, 2016.

The Sandmeyer Prize is awarded to a person - excluding tenured professors - or to a group for outstanding work in industrial or applied chemistry. The work must be completed in Switzerland or with the involvement of a Swiss national. The prize is awarded annually and supported by the Division of Industrial and Applied Chemistry of the SCS. 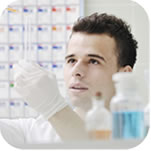 The KGF/SCS Industrial Scientific Awards are given to scientists working in Switzerland that are still working in industrial R&D.

Distinguished Industrial Investigator Award honors senior scientists on the top of their research career for their lifetime achievements.
Certificate and cash check of CHF 15’000
Rewarded only on decision by the board

Call for nominations for the KGF-SCS Awards 2017

SCS Awards are sponsored and supported by