The 14th Delegate Assembly (DA) of the European Young Chemists’ Network (EYCN) took place in Bremen on March 17-20, 2019 and it was organized in collaboration with the

The 14thDA also involved the elections of the new Board of EYCN.The SYCA Delegate, Dr. Jovana V. Milić (EPFL), was elected Team Leader of the Networks team, formerly led by Dr. Victor Mougel (currently Professor at ETH Zurich). The team is dedicated to increasing the impact of EYCN through its activities and international partnerships with academia, industry, and governmental bodies, while connecting and supporting young chemists. Moreover, Amin Hodaei (EPFL) joined the Global Communications team as a participating Delegate. Over the next two years, the EYCN will continue with the activities and public outreach, promoting the interactions of the young chemists across Europe. The next DA will take place in February 2020 in Sitges, Spain, and it will be organized by the Catalan Chemical Society. The participation of the Swiss Delegates will hopefully promote closer collaboration between the two associations. 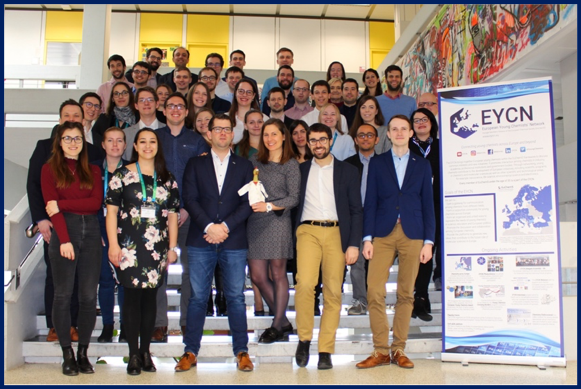 Participants of the 14thEYCN Delegate Assembly in Bremen, Germany in March 2019

For more information about EYCN, please refer to their website www.eycn.eu.

The Swiss Young Chemists Association
in collaboration with the EYCN Team
07.05.2019