«Le Grand Prix de la Fondation de la Maison de la Chimie» is intended to reward an original work in chemistry, of benefit to mankind, society or nature. The Grand Prix will be awarded for the thirteenth time in 2014 to one or several persons, irrespective of nationality. It carries a monetary award of 35,000 Euros.

Entries
Entries must imperatively be presented through a scientists' society or a national or international scientific organisation without any direct link with the nominee. Entry forms, together with a report detailing the arguments for the nomination, must be received at the Fondation de la Maison de la Chimie no later than 28th February 2014. The nomination documents should be sent by e-mail to the SCS that hands in the formal nomination. Please send your nomination dossiers no later than 15th February 2014 to .

Jury
The international jury composed of a chairman, 9 members recognized for their work in the various fields of chemistry, and the laureates of the two previous GRANDS PRIX. Three members of the jury must be of a nationality other than French. The jury is assisted by a scientific coordinator. The chairman of the jury is the incumbent president of the Fondation de la Maison de la Chimie, the other members being appointed by the Board of the Foundation.

Award ceremony
The award ceremony for the 2014 Grand Prix will take place on November 12th, 2014 at the Maison de la Chimie in Paris. The laureate will be invited to deliver a lecture on his/her work on this occasion. 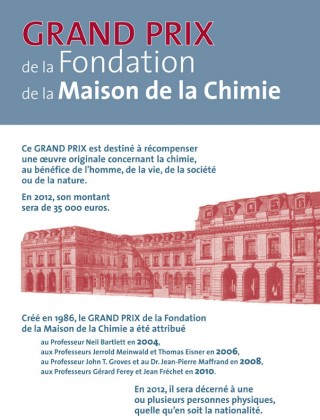