Call for nominations for the SCNAT Chemical Landmarks 2015 and 2016 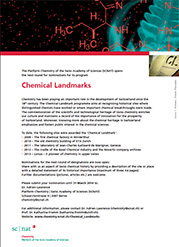 The «Platform Chemistry» established the program «Chemical Landmarks» to identify and manifest the scientific and technological heritage by awarding sites which have played a significant role in the history of chemistry in Switzerland.

The goal of the program is to recognise historical sites where distinghuised chemists or important chemical breakthroughs were made and to emphasize and foster public interest in the chemical sciences.

The next round of nominations is now open until 31 March 2014:

Everyone – chemist or non-chemist, historian or non-historian – is encouraged to submit their nomination to the «Platform Chemistry» by 31 March 2014.

The proposals will be reviewed by a committee of chemists, chemical engineers, and science historians.

More information on the «Chemical Landmarks» website of the SCNAT.